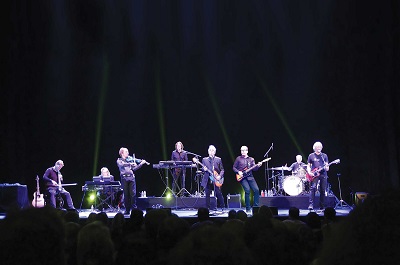 Mik Kaminski • The world famous blue violin player, Mik recorded and toured with the original ELO from September 1973 to 1986, then with ELO Part II from 1988 to 2000. Mik is a founding member of THE ORCHESTRA since the name change of the band and start of touring in early 2001.
A violin prodigy, Yorkshire, England’s Mik Kaminski joined ELO in 1973 after famously answering an advert in Melody Maker magazine. Ever since, Mik and his blue electric violin have dazzled rock audiences the world over. A consummate showman, Kaminski is the original violin wild man, shattering traditional notions of stage propriety with a classical instrument. If not for his talents on violin, Kaminski’s vocation may well have been humorist, as he is easily one of the funniest persons you’ll ever meet. You just have to sort through his Yorkshire accent to get to the jokes.

Eric Troyer • Co-lead vocalist, composer, keyboardist and guitarist with ELO Part II from January 1988 to 2000. Eric is a founding member of THE ORCHESTRA since the name change of the band and start of touring in early 2001.
Indiana, USA native Eric Troyer’s professional resume reads like a who’s who of rock history. His voice can be heard on mega hits such as “Woman” by John Lennon, “Uptown Girl” by Billy Joel, “Total Eclipse of the Heart” by Bonnie Tyler and on songs by Aerosmith, James Taylor, Meatloaf, Kiss, Lou Reed and many others. A founding member of ELECTRIC LIGHT ORCHESTRA Part II, Troyer’s distinctive voice and keyboards, not to mention his tireless work ethic, have been a staple of the band for more than 30 years. Troyer has managed to survive years of exposure to the highest levels of rock and roll insanity with his good humor intact. He is a health nut and history buff.

Parthenon Huxley • Co-lead vocalist, acoustic guitarist and lead guitar with ELO Part II from November 1998 to 2000. Parthenon is a founding member of THE ORCHESTRA since the name change of the band and start of touring in early 2001.
Singer, Songwriter and Guitarist Parthenon “Hux” Huxley joined ELECTRIC LIGHT ORCHESTRA Part II in 1998. His first shows with the band included dates in South America, Europe and The United Kingdom, highlighted by a sold-out night at Royal Albert Hall. Hux composed four songs for THE ORCHESTRA’s first studio album No Rewind. In addition to that album his outstanding vocal and guitar work can also be heard on The Orchestra Live which was recorded before a crowd of 8,000 fans in Vilnius, Lithuania. Hux’s original music appears on ten albums including Sunny Nights (Columbia Records) and Purgatory Falls (Universal). His single, “I Loved Everything” went to #1 on Rolling Stone’s Exclusive Download Chart. Additional credits include four Top 20’s, three Album of the Year awards and hundreds of tracks that appear in film and TV. Hux is married with two daughters.


Gordon Townsend • Drummer and back-up vocalist with ELO Part II from December 1999 through 2000. Gordon is a founding member of THE ORCHESTRA since the name change of the band and start of touring in early 2001.
A native of Philadelphia, PA, Townsend began drumming professionally in his teens. He moved to Los Angeles in 1994 and formed P. HUX with Parthenon Huxley. After Huxley joined ELECTRIC LIGHT ORCHESTRA Part II, Townsend was the first choice to replace ELO founding member Bev Bevan on drums. Townsend has been with THE ORCHESTRA since the name change playing down an unshakable back beat beneath the band’s often complex musical arrangements. A pro’s pro, Townsend steers his performance to the needs of the song, avoiding flash but supplying rock solid power and finesse. He is a sucker for cool musical gear and rescue dogs.

Glen Burtnik • Co-lead vocalist, bassist and occasional acoustic guitarist who began working with ELO Part II during the mid-1990’s on choice tours. Glen has been a member of the ELO part II and THE ORCHESTRA touring family from 1998 to late 2008 at which time he became a full member of THE ORCHESTRA in February 2009.
Glen Burtnik’s extensive showbiz career includes a stint on Broadway as Paul McCartney in Beatlemania, a Billboard #2 smash hit “Sometimes Love Just Ain’t Enough”, ten years as frontman for rock legends Styx, and even several short runs as bassist for ELO Part II. Glen also released two solo albums for A&M Records. Burtnik is beloved in his home state of New Jersey for his over the top musical revues, most famously his Xmas Xtravaganza, which features dozens of notable performers. If Bruce Springsteen is the Boss, Glen Burtnik is surely the assistant manager.

Louis Clark • Louis began working with THE ORCHESTRA in 2015 on live shows around the world as a conductor, guitarist, string player and keyboardist. Louis has been a member of the ELO part II family (for arranging during the 1990’s) and THE ORCHESTRA touring family from 2015 through early 2018 at which time he became a full member of THE ORCHESTRA in mid-2018.
Louis Clark is a graduate of the Royal Birmingham Conservatoire (RBC) which is located within Birmingham City University (RCU). This is one of the world’s foremost artistic educational institutions with a choice group of 1,200 students in their music school, drama school and studies pertaining to its concert venue in Birmingham, England.

After graduating from the RBC Louis began arranging and conducting for various orchestral and musical groups. In 1990, he was invited by his esteemed father Louis Clark Sr., who was world renown as the arranger for Electric Light Orchestra, to begin working with him as a copyist and assistant arranger for his father’s newest group Electric Light Orchestra Part II. This work then morphed into doing that same work 10+ years later from 2001 with THE ORCHESTRA.

In early 2015 Louis began working with THE ORCHESTRA on live shows around the world as a conductor, guitarist, string player and keyboardist. His first tour with the band covered North and South America as well as Europe.

In 2018, Louis was offered full membership in THE ORCHESTRA. He is now responsible for a number of roles in the band and is one of the most versatile on-stage performers in the group. Louis enjoys letting loose on his electric cello especially during the rockier songs. He can also be seen and heard on acoustic and electric guitar at each show and occasionally performing 2nd violin alongside Mik Kaminski. Since the passing of his Father in early 2021, Louis is now the group’s sole arranger and orchestral conductor.

As an arranger Louis has worked with many artists in The United Kingdom. He works regularly with the Leap Ensemble of the Royal Birmingham Conservatoire. As an example of one of his awards, Louis won the Andrew Downes Composers' Competition in 2014 with his orchestral composition “The Dudley Bug." Louis has also had his original music featured in the film The Last Projectionist which is a 2015 film by Tom Lawes. Like his Dad he is an English Premier League football fan and Beatles fanatic. 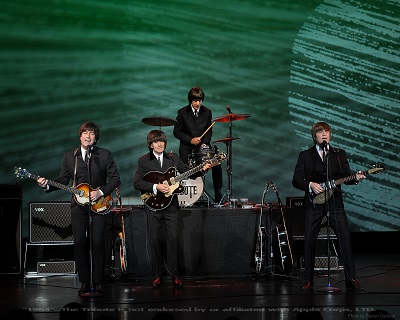 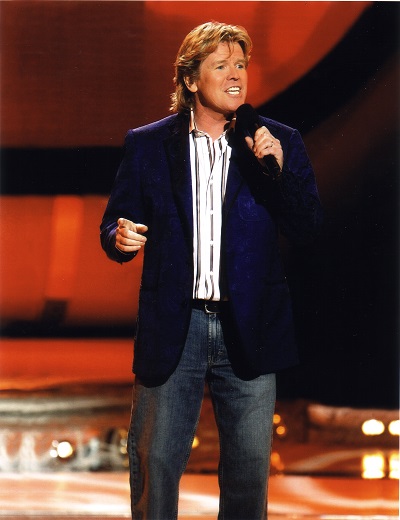