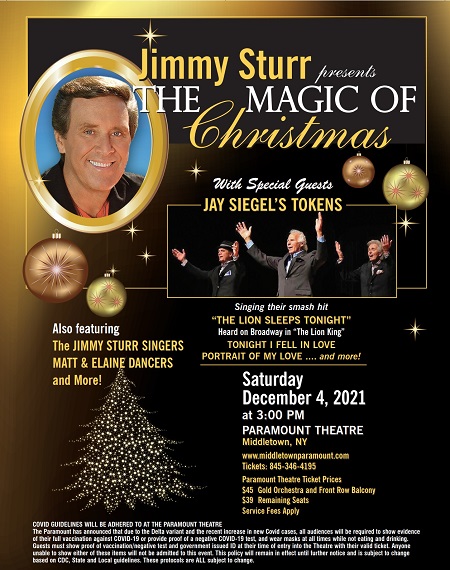 Tickets are $47 For Orchestra & First Row Balcony
and $41 for the Remaining Balcony
Includes a $2 Service Fee per Ticket, (applied online, over the phone or in person)
Please be advised there are no elevators to the Balcony
About Jimmy Sturr


At the time that rock was reaching its crescendo, and in the era when Country was dazzling the nation, a strange phenomenon was taking place. In essence, this phenomenon was the rising popularity of JIMMY STURR as the hottest musical attraction in the polka music field.
The reigning king of the field is a good looking, smiling charmer with brown hair, blues eyes and charismatic rays emanating from his presence. Sturr is the fellow in front of the orchestra.
And what an Orchestra it is! JIMMY STURR AND HIS ORCHESTA has over 106 recordings; the excellence of these recordings has been recognized and rewarded throughout the very competitive music industry. The fact that JIMMY STURR AND HIS ORCHESTRA is on the Top Ten list of the All-time Grammy Awards, has won eighteen Grammy Awards and has received more consecutive Grammy nominations that anyone in the history of musical awards has made the music industry sit up and take notice. Broadcast Music Inc. (BMI) has awarded JIMMY STURR & HIS ORCHESTRA its most valued award, the Commendation of Excellence. The only one ever awarded in the polka music field.The band constantly attracts crowds of screaming, adoring fans wherever their travels take them. Their tremendous popularity has resulted in not only numerous Grammy Awards, but also being voted The #1 POLKA MUSIC BAND IN THE COUNTRY for the past ten years.Many great things have happened to JIMMY STURR AND HIS ORCHESTRA, but none has been more exciting than just completing their Fourth recording with country superstar WILLIE NELSON. In addition they have recorded with other artists such as THE OAK RIDGE BOYS, CHARLIE DANIELS, BOOTS RANDOLPH, MEL TILLIS, BRENDA LEE, plus banjo virtuoso, BELA FLECK, and folk legend ARLO GUTHRIE.One of the major events in Jimmy’s career came when the Orchestra was asked to appear on The Grand Ole Opry. They were not only the only Polka Music Band to all appear, but the only band to appear with brass.A question on Who Wants To Be A Millionaire? television show hosted by Regis Philbin, was Who is Americas polka Music king? The contestant won $250,000 by correctly answering Jimmy Sturr. Sturrs music has been heard on the TV show JEOPARDY and articles have appeared in print throughout the nation including a front page story on The Wall Street Journal and full length story in US World and News Report.The incredible popularity and success of JIMMY STURR AND HIS ORCHESTRA has caught the attention of many networks, including appearances on CNN, ABC, NBC, FOX NEWS and a fifteen-minute segment on CNN Headline News that aired worldwide.The band has made several appearances on Saturday Night Live. The quality and appearance of JIMMY STURR AND HIS ORCHESTRA makes them sought after for television commercials such as Budweiser, Pontiac, and Mrs. T’s Pierogies, who signed Jimmy to be their National spokesperson.Jimmy can now be seen on his national television show on the RFDTV network on Direct TV Channel 345, Dish Network Channel 231 on Friday’s at 7PM EST and on Family Net Sunday’s at 5:30PM EST. Jimmy Sturr syndicated radio show will now be heard on Sirius XM rural/radio Channel 80 on Saturday at 6PM EST.Due to the great demand for live appearances by The JIMMY STURR ORCHESTRA they have an extensive road schedule of 165 dates per year. They crisscross the country and make several international trips yearly. While on the road they travel in Jimmys forty-five foot customized tour bus. The Bands travels have taken them to some of the most prestigious venues in the world, including seven Sold Out concerts at Carnegie Hall and four Sold Out concerts at Lincoln Center in New York City and a sold out concert at The Palace of Culture in Warsaw, Poland where the band received seven standing ovations.The Band appears annually at many of the top casinos in the country including Mohegan Sun Casino, Uncasville, CT; The Tropicana and Taj Mahal in Atlantic City, NJ; Patowatomi Casino, Milwaukee, WI; Soaring Eagle, Mt. Pleasant, MI; The Presidents Casino in Biloxi, MS; Mountaineer Race Track and Gaming Resort, Chester, WV and Sam’s Town Hotel and Casino in Las Vegas where Jimmy was the first polka music band to be booked by a major casino. The sellout crowds at these popular events keep coming back for more wherever they see the band scheduled.Today, JIMMY STURR lives in the house he grew up in, his office is across the street from the high school he attended in the upstate village of Florida, New York with a population of 1,800. His hometown recently honored Jimmy by placing a Star of Fame in the walkway on Main Street. They also display HOMETOWN OF POLKA KING JIMMY STURR signs at each entrance to the village. Five gold albums, each representing five million dollars in sales, are displayed on his office walls where he runs his various businesses which include United Polka Artists, Starr Record Company, Jimmy Sturr Travel Agency, a publishing company and his syndicated radio show.A full scholarship gave Jimmy the opportunity to attend and graduate from Valley Forge Military Academy. Among his many accolades, and something Jimmy is very proud of, is his selection by The Valley Forge Military Academy as Man of the Year, he was honored with a full-dress parade in front of the Corp of Cadets at VFMA.No one has done more for the polka field than this young Irishman from the little village of Florida, NY. Seeing is believing. When you see JIMMY STURR AND HIS ORCHESTRA in person, you know why they draw the huge crowds, have been voted #1 in the country and considered THE BEST IN POLKA MUSIC.