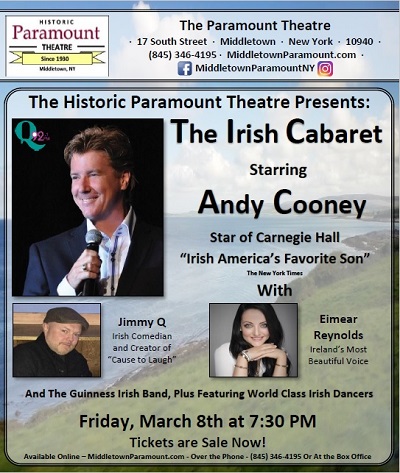 The sights and sounds of Dublin’s fair city comes alive in The Irish Cabaret! Andy Cooney Irish Cabaret is surrounded by the best in Irish Entertainment! This is an event that showcases Ireland’s Music, Song, Comedy and Dance as only Andy Cooney can bring it as he has for over 25 years! Don’t Miss the most fun show you’ll enjoy all year!

Andy Cooney is one of the greatest singing sensations on the Irish Music scene today. The New York Time’s christened him Irish America’s Favorite Son, a title he is most deserving of.  From the National Concert Hall in Dublin to his 8 Carnegie Hall sellouts along with numerous Performance Arts Centers concert appearances throughout North America, Andy is also one of the famed New York Tenors an is also known for his annual Cruise of Irish Stars which draws over 1,000 Irish and Irish Americans on a Caribbean Cruise enriched with the best Irish entertainment including the great Ronan Tynan. The Irish Cabaret will showcase his outstanding voice and dynamic stage presence along with his versatility, and air for entertaining coalesce creating the ability to deliver a song directly into the hearts of any audience. Cooney has recorded 19 albums to date, including Bright Brand New Day with Phil Coulter and his Orchestra, and his latest CD, Irish Country Skyline, was released in the summer of 2016 to huge success all over Ireland and the UK.

Eimear Reynolds is from the beautiful picturesque village of Rooskey in Co. Roscommon, Ireland. Eimear was brought up in an extended family of musicians and singers so it was no surprise when she began to have a keen interest herself. Eimear won the prestigious title of ‘Face of Ireland” back in 2014 which allowed her to become an ambassador for young Irish people around the world. Eimear used her music as she traveled throughout her year as ‘Face of Ireland’ to highlight and spread some wonderful Irish songs across the globe.

Irish comedian Jimmy Q brings a bold, bald presence to the stage, introducing audiences to various characters and re ecting one very day life situations. He has been heard on Sirius Satellite Radio, the Joey Reynolds Show, WPDH’s Coop and Tobin Show and the Comedy Pointe, and been seen on MNN-TV. Jimmy also created Cause to Laugh, a fundraising that uses laughter to support a variety of worthy causes. Cause to Laugh has raised thousands of dollars for countless organizations and charities, including Memorial Sloan Kettering’s Pediatric Cancer Center, St. Jude’s Children’s Hospital, Team in Training, Dan Waeger’s Collegiate Cancer Foundation and the Haiti Relief effort.

The Guinness Irish Band is made up of the greatest Irish and Irish American Musicians on the Irish Music Scene today. This years tour will feature Jimmy Kelly on drums who’s amazing talent was appreciate with the world renowned show Riverdance. Mitch Reilly on Sax, ute and Irish whistles is a veteran on the music scene today. He has toured with greats such as, Englebert Humberdinck, Brendan Lee and Celtic legend Phil Coulter. Colm Graham is a 40 year veteran in the Irish Music world working with Ireland’s greats, Roly Daniels, Margo, Dermot Henry and has toured with Andy Cooney for over 25 years.   The Guinness Irish Band will be lead by decorated Musical Director PJ Cardinal.

World Class Irish Dancers: Dublin’s Irish Cabaret features the nest in Irish Dancing. All of the dancers are highly trained and decorated with some of the most prestigious awards in the Irish Dancing World. They will be sure to dazzle you with their amazing steps.